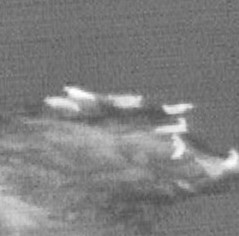 Harbour seals are almost impossible to see when they haulout on rocky shores.  In order to count the numbers of animals in the population (particularly in Scotland) scientists at the Sea Mammal Research Unit developed a clever way of overcoming this problem.  Since animals are counted during their annual moult in August, they are hotter than their surroundings because the skin is perfused with blood associated with the loss and regrowth of the hair.  So by using a thermal image camera mounted in a helicopter the survey team are able to count the numbers of animals on land from their thermal footprint.  This technology and recent developments linking it to GPS tracking has enable us to accurately assess the size of the harbour seal population in Scotland and detect a dramatic decline in numbers in some regions.